Does the name Jorge Yarur Bascuñán ring a bell at all? You’ll be forgiven if not, I certainly wasn’t. The descendant of a long line of fabric merchants from the Middle East, he turned the family mansion (an incredible fusion of 60’s and Japanese architecture in Santiago, Chile, into a museum dedicated to fashion and the memory of his Italian mother – a well known Chilean socialite and lover of high end fashion.

“Countries that don’t consider the importance of fashion, are the ones where uniforms take the lead” – Francois Mittterrand, French President 1981-1995

But he’s also been a collector of some of the most iconic items of clothing we could think of – pieces of clothing from the 1980’s – a decade that was a cocktail of contradictions, a time of crisis where people still placed extreme importance in the arts, where fashion was a recreational extravaganza through which designers expressed their individualism and abandoned any pretension of good and bad taste.

Not only are there are 100’s of garments in here documenting fashion’s history over the last 300 odd years, but items like the conical bra Jean Paul Gaultier designed for Madonna, Michael Jackson’s glove and the t-shirt he worn in the video for ‘Beat It’ and my personal favourite – the actual calico toile of Princess Diana’s wedding dress! 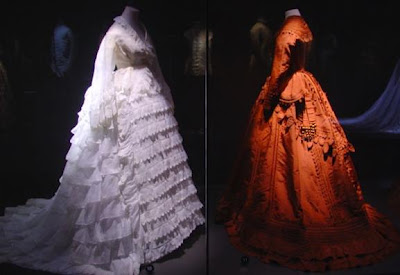 “The difference between style and fashion is quality” – Georgio Armani

“Because clothes should be worn, used” – Issay Miyake 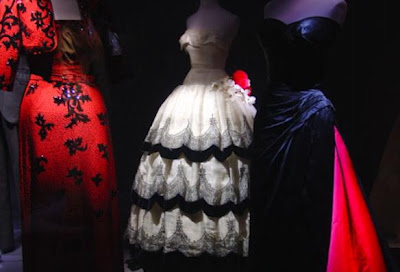 Other things I loved seeing?

Iconic pieces from Vivienne Westwood’s collections throughout the 80’s – including her original ‘gathered tube skirt’ which went on to become one of her most sellable pieces.

Thierry Mugler was a bit of a standout for me in this exhibition, especially his lightning bolt lapel jacket from his A/W 1988 collection, which I stood drooling over for quite some time. I couldn’t quite get a non-blurry picture so have appropriated two of one very similar garment from the interwebs:

Plus there was plenty of pieces from 1980’s collections by Comme des Garcon, Issey Miyake, Chanel, Valentino and so many more. Needless to say this was an amazing day out!

“Elegance is forgetting what one is wearing” – Yves Saint Laurent

I came across this place when researching things to do and see whilst we were in this part of Chile, and immediately knew it was somewhere I wanted to visit. I just had to figure out a way to sell it to my beau on terms that would appeal to him…

Turns out I didn’t need to bother – the family bought the Delorean (the time machine car from Back to the Future) in 2008, along with Marty’s self adjusting jacket and Nike shoes (which are stored in a hermetically sealed chamber to prevent further degradation to the light ad oxygen sensitive polymers they were made from), not to mention the piece de la resistance for Mr poppykettle – the jacket worn by Arnie in the original Terminator. After he discovered that, I think he was more excited to visit than I was!

There’s a fabulous article here that was what made me initially want to visit. Worth the read! And of course, if you happen to be in the neighbourhood – do stop by.