If you remember the ‘Color Me Beautiful‘ craze back in the 80’s (and we won’t judge you if you do), then you’ll know about the whole categorising of people into colour schemes thing (and it’s limitations for people who didn’t fit the Caucasian mould it was originally designed for). For those of you who aren’t familiar with this fabulous 80’s fad of epic proportions…

“Carole Jackson exploded onto best-seller lists over [25] years ago with Color Me Beautiful. The basic premise of Ms. Jackson’s seminal work is that women can be divided into two groups: gals with warm skin tones and gals with cool ones. These two groups can then be divided – like life itself – into four seasons: Autumn and Spring (warm); Winter and Summer (cool). Each season has a set of complimentary color swatches that provide poor, lost souls the tools to cobble together a coordinated wardrobe for themselves. We cult members call this process ‘having your colors done”. Color-Me-Carole spawned millions of swatch-wielding followers and apostles: In swanky living rooms and tawdry trailer parks across the nation, Color Me Beautiful consultants courageously attempted to cut the cackle out of clothing consumption.”

Excerpt taken from Simon Doonan’s website – you can read it here.

Personally I think the basic concept is sound, and I’ve been wanting to try it out since I read about it at the beginning of the year – so I did some recon and booked a ‘Colour Analysis’ appointment – a completely modernised version of Carole’s approach (and suitable for every skin colour under the sun) – we are having a bit of an 80’s revival after all, aren’t we?

It was a fascinating couple of hours, as we discussed the impact of colour on personality, our interactions with others and how we are perceived based on how we present ourselves, and not just with styles – but colours as well. Anyone who doesn’t believe that colour can positively or negatively influence needs to read this!

I won’t blather on about my specifics, but after being draped in fabric swatches of myriad hues I now have a ‘wheel’ for my best coloured foot forward. My best hue’s are ones with ‘low intensities’ (rather than high impact and bright jewel tones) and I’m ever so slightly more warm than I am cool (it’s a sliding scale between extremes). It’s nice not to be too surprised – I know that I’m automatically drawn to blues and greens when fabric shopping, so seeing a lot of options in these categories is comforting :)

It was no surprise to me that black is not my colour (the darker shades above are charcoal greys, purples and deep burgundy’s) – I’ve always been a tad anti-black, so it looks like I’ll never be able to call myself officially Melburnian…

My best basic ‘neutral’ colours have lots of greys, olive earthy tones and warm beige’s. No simple white though – I’m better off with cream! 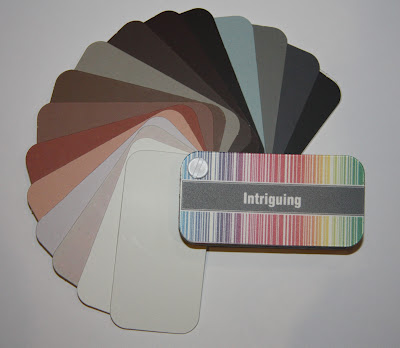 The colours I’m most excited about though? The ones I’ve always been a bit apprehensive of. I’m really very shocked to see that bright fire engine red there, and so much orange. It’s a little exciting – I’m definitely going to have to break out and experiment! Including some non-standard hue’s by outsourcing the hard decisions to my wheel will be lovely.

On that note – I know a lot of people are against the whole concept of ‘being told what you can and can’t wear’ – just have a look at the comments in the ‘Color Me Beautiful – Friend or Foe‘ post by the fabulous Peter Lappin. I don’t really have a problem with such things, as long as I like the end result of course. It’s not like this colour wheel is the law or anything, it’s a guideline, and guidelines are supposed to aid, rather than define, the solution. One of the things my consultant stressed is that it shouldn’t stop me from wearing colours that aren’t on the wheel – but I’ll get the best result if I adhere to a 20/80 rule (small amounts of brighter colours mixed with larger amounts of softer colours).

The simple way to use a tool like this is to place it up against a prospective fabric/garment – if the colour seems harmonious with the wheel, then it’s more likely than not to be flattering. If the colour looks jarring or out of place against it, then I’ll probably move on. I like this concept, especially because when it comes to sewing my own clothes, I often struggle to visualise the end result when working with fabric colours I’m not 100% comfortable with (especially prints and patterns!), which is probably why everything I’ve made to date has been in that comfy ‘safe’ category. I’m hoping this little wheel will take the guesswork out of whether it will suit me or not. I’ll be putting this concept to the test as soon as I can :)

We also identified the colours within my wheel which are the best of the best, and to put it as my Consultant put it – these are the colours that make my face ‘pop’:

My appointment included a ‘make-up update’ and an application lesson. Considering the only make-up I own is mascara and a red lipstick (which, mind you, only get pulled out for the odd special occasion) I wasn’t sure how useful this would be – but I’ve always suspected my laziness around the whole make-up thing had to do with having zero knowledge of how to apply the goop in the first place.

I’ve always wanted a basic, everyday, neutral lip colour though – something for a bit of extra definition – and I’ve never been able to find it. But thanks to my Colour Consultant I now have one, and the reason I never came across it before is because it’s a colour I would have looked at, pulled a nasty face at, and moved onto the prettier colours. It’s frustrating that you can’t really tell how a lipstick colour will suit until you put the darn thing on!!

I went out and put my money where my mouth is – I now have a grand total of 3 lipsticks, and I’m actually going to wear them too. My beau was as shocked as I was at how good the colour looked on as to how boringly brown it looked in the tube. Success!

So – Have you ever had your colours done? Did you take part in the ‘Color Me Beautiful’ obsession? If not, would you consider it?