The first half of this year gave me an incredible amount of time to ponder my sewing style, and as a result of having a bit of distance from the actual act of sewing anything ‘normal’, I’m finally beginning to feel like I have a bit of direction to curate my ‘to-sew’ list. Simply put, I’m happy to buy basics and to put my sewing skills (and limited sewing time) to use creating beautiful, structural and really well made items that fit in with my basics.

It’ll be quite a long while until you see another dress on this blog – and I want to get back to sewing what I love most – jackets. I’m excited about it because there’s still so much I want to ‘get right’ in this area of sewing skills, mostly around setting in sleeves and getting them to look really professional. It’s the main area I really notice as being sub-standard on all the (non-French!) jackets, coats and blazers I’ve made to date.

So, I’ve started out on two jacket projects which I’ll be working on either exclusively or in the background when I’m enticed away to sew something else.

The first, a gift for my Mum – as she’s having quite a significant birthday event in early May next year. It will be a French Jacket, in a boucle I got from B&Js. It’s a lightweight fabric because Brisbanites don’t get nearly as many chances to wear jackets as we do further South! It will be tough to work with, as it’s already fraying like a Beast…

It will also mean interstate trips for fitting – the first of which is already done to adjust the muslin and so she could select the lining from a bunch of samples I took up with me.

Mum is virtually identical in body shape to me (although I guess it’s technically me that’s identical to her) so her adjustments were minimal as the Vogue 7975 pattern fits her nearly as well as it did to me.

I’ve already cut out and begun the basting process… fun times ahead :)

The second Jacket project is for me, and the intent is for it to be a hybrid between French and Tailored. I’ll be sewing with Marfy 3348, which was one of the free patterns that came with the 2014 catalogue (you can also buy it online – they have pdf now, whoohoo!): 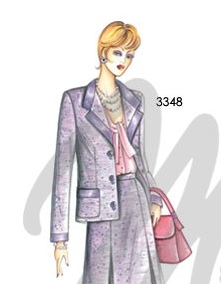 The collar and front facing will be tailored – pad stitched and horsehair canvas – while the rest of the jacket will be quilted. Although I’ve yet to test out the quilting for this fabric combination so that may change based on how well it turns out. This project was inspired by Leisa’s tailored/French hybrid with Marfy 3182, which you can read about here.

My fabric is one of those special fabrics that you hoard until the ‘right’ moment, although this is probably less of a ‘right’ moment and more of a ‘can’t wait any longer’ moment. I’m not a patient person.

It’s a cream and mint boucle, from one of my favourite shops – Stitches to Style.

The current plan is to underline the parts of the jacket that will be quilted with some lamsbwool (from A Fashionable Stitch) so as to keep the balance between the weight of the front which will be backed with horsehair canvas. The lambswool is deliciously soft, but not very amenable to staying on grain!

But I’ve yet to decide whether I’ll be setting in the sleeves, or hand sewing them in to get that lovely soft shoulder curve that my French Jacket has. Potentially they’ll be set in as getting the right location for hand sewing may be a bit too challenging on my own. We’ll see.

The Marfy pattern as intended has a contrast section at the collar which I’d original though to use the lining for. After making and adjusting my muslin, the collar feels a bit smaller than I was envisaging, so I’m thinking of using a matching pale cream charmuese here instead – using the illusion of colour to visually cheat and make it look a little bigger.

The jacket pattern is only slightly fitted – of course, it fit really very well out of the packet – just with the need for a bit of extra boob space. I did flirt with leaving it otherwise unadjusted – but decided in the end that having a non-waist-defining jacket wouldn’t be doing me many favours. So I did pin in the side and princess seams slightly to get a closer fit, and I more than likely will add more space at the upper arms. I can determine that better at the first basted-together fitting, as my fabrics will be thicker than my mock-up! Thank goodness for large seam allowances, as they really do allow you to take into account the differences between how the toile’s fabric and the final fabric react to the pattern.

Also, simple things like the fact that the upper and lower collar pieces allow for turn of cloth make me smile. The sleeve cap looked fabulous just in the muslin, too. Here’s the final, adjusted, un-clipped and un-pressed muslin… gosh they always look terrible on camera:

I finally go to try out the walking foot on my machine, to see how the combination of fabric, lambswool and charmuese worked with quilting: 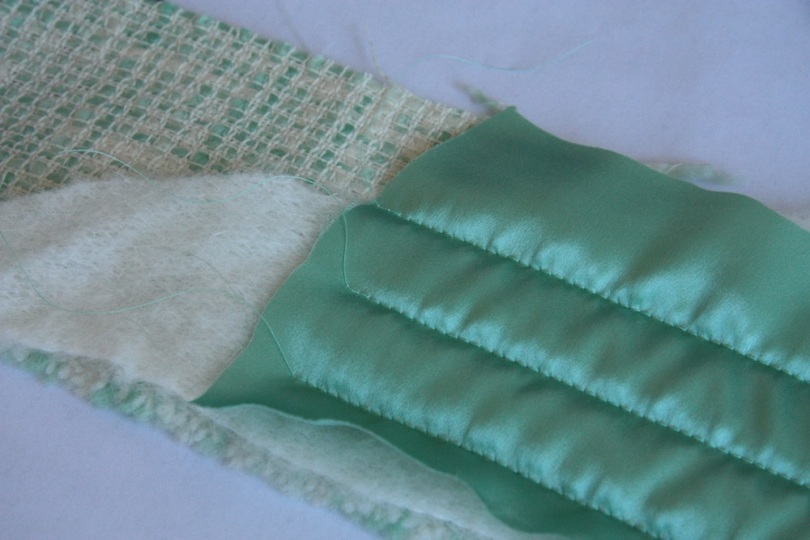 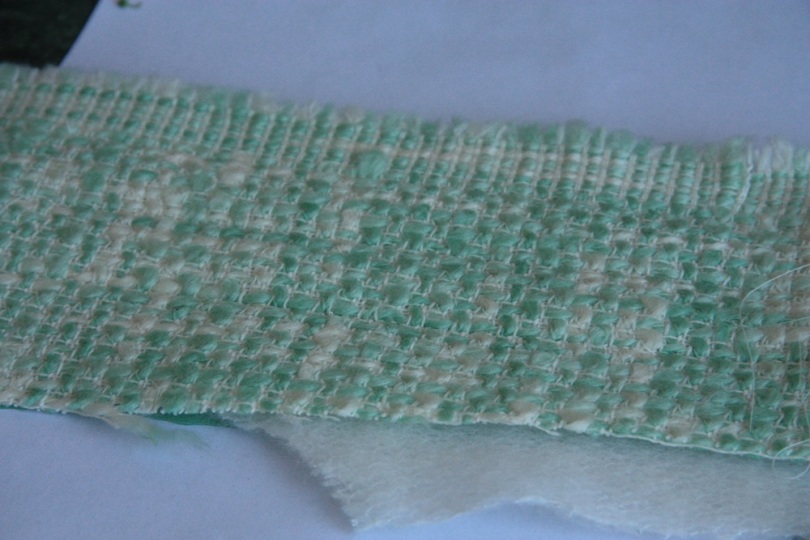 Totally luxe and lovely on the inside… but the lines do show through somewhat on the outside (probably due to the loft of the lambswool).

For now I’ll most likely power forward on my mum’s French Jacket (because I know what I’m doing there) so I can ponder just how I’m going to bring all those elements together into the Marfy Jacket and decide whether I’m willing to ‘go Jackie O’ (I’ve read that apparently on some of Jackie Kennedy’s Chanel Jackets, the quilting lines were visible). In the meantime, I’ll be posting progress shots on instagram, of course.

Hi, I'm Melanie! Sewist, Feminist and Industrial Engineer. This space is for my love affair with all things garment construction :)