After summer played hide and seek all through December, it finally appeared with a vengeance over the new year weekend. I suddenly realised – here I am making a suit jacket when its 40 degrees outside. Uh, maybe I should make something a little more season appropriate?!

I had wanted this pattern the moment I saw it. I was forced to wait until Colette Patterns had them back in stock after a supply blip… getting more and more jealous each day of the lovely Peony’s showing up over at Burdastyle, Coletterie and Pattern Review. Finally, a package from Colette landed on my desk (naturally – on the first of 3 days I had to be interstate for work!).

I’ll be making this with a delicious apple green stretch cotton from Tessuti which is apparently called ‘oregano’ green. (From the picture, I think the supplier may have got that wrong. It is very definitely apple green.)

I’m wanting to try something different on the hem however – perhaps a horizontal pleating effect or pin-tucks? Then I came across the gorgeous cotton batiste lace you see above on Etsy from dishyvintage – instant attraction followed immediately by purchase reflex.

This is my second attempt at a Colette pattern, and they seem to require a ridiculous amount of fine tuning to properly fit my body shape without looking like a hock-up. This dress has a lot more ease than I would ideally prefer – a good 2 inches. So I thought I was doing the right thing by grading a size down. Unfortunately for me, this meant that the front two darts were a good 2cm inwards of where they should be pointing: 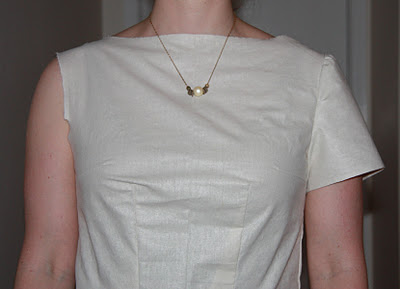 So maybe I should have just stuck with my size and downgraded the seams as per usual. There’s also a weird bulge going on at the back (it looks a lot less smaller in this photo thanks to the 2D-ness of it all – I will have to pin that out and alter the pattern to get rid of it: 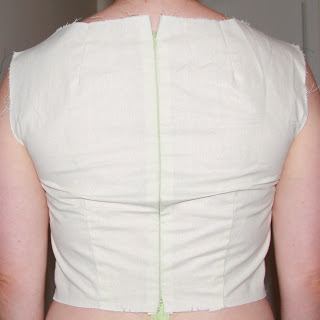 From trawling through my sewing books, this is due to an ‘erect back’ which can be fixed by taking a horizontal dart out from the centre seam line where its needed. This means the centre back seam becomes slightly curved:

But you know sometimes if you stare at or think about a word to much, the spelling of it begins to looks completely ridiculous? I’m doing that, but with the now non-straight grain line. I’m going to stick with the ‘original’ grain line on the top half. Does anyone have any suggestions otherwise?

I am totally impressed that there’s no gaping at the armhole though – usually this always happens to my patterns! I chalk this up to Colette patterns being made for a slightly curvier/bustier gal, rather than the standard B.