Happy New Year, everyone :) May 2018 be happy, safe and have lots of sewing for you!

Marfy 3889 – probably one of the simplest and quickest shirts I’ve ever made! 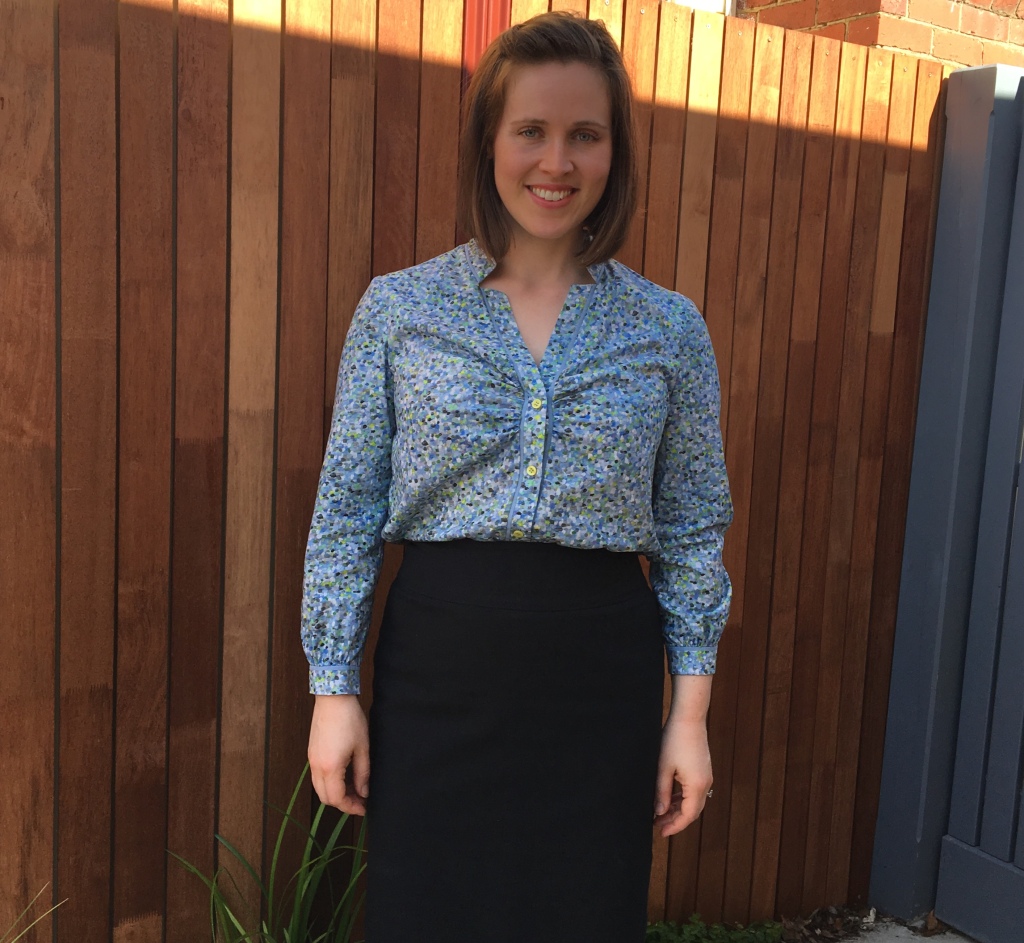 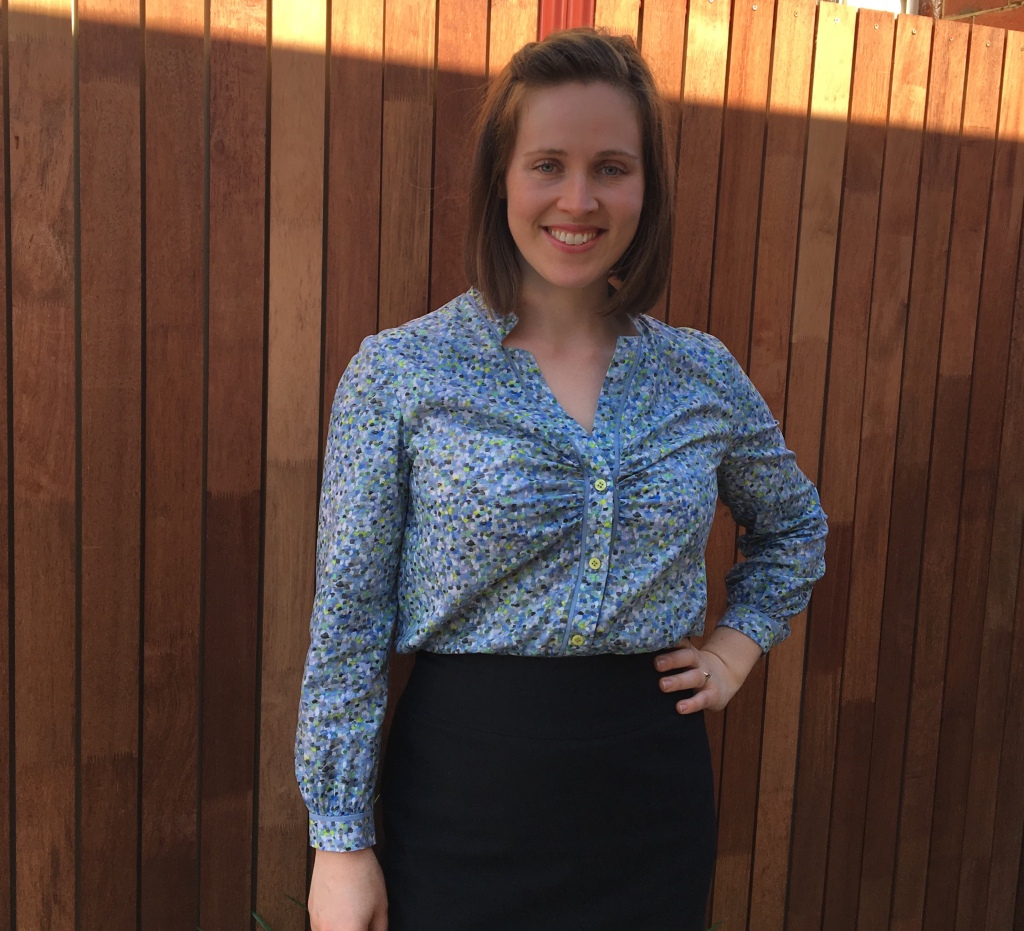 It’s from the 2016/2017 catalogue, and described by Marfy as “Shirt with gathered bodice. To be made in voile or crepe with contrasting edging”.

PATTERN
The pattern has a straight hem with a split at the side seam, and is not shaped (there is only one back pattern piece, two for the front, a sleeve, cuff and three collar pieces) apart from some gathering at the bust. The ‘contrast edging’ is in three pieces – one around the neck for the collar and two forming the button placket (one on each side).

This is my go-to size – the 46. It’s a boxy fit! Suprisingly to me, I chose to leave it be, apart from raising up the hem by 3cm. It’s definitely long on length, and I’m already long in the body.

After trying on my muslin with a work pencil skirt, I decided I quite liked the ‘blouson’ effect of the fabric billowing over a fitted waistband – I get enough shaping from that effect to satisfy my desired silhouette.

I think it looks far better tucked in, and given the pattern length and sketch, I suspect this is how its intended to be worn. As you can see – I really just don’t suit the boxy/shapeless look… but this shirt will be super handy should I ever be pregnant again. Lots of space! 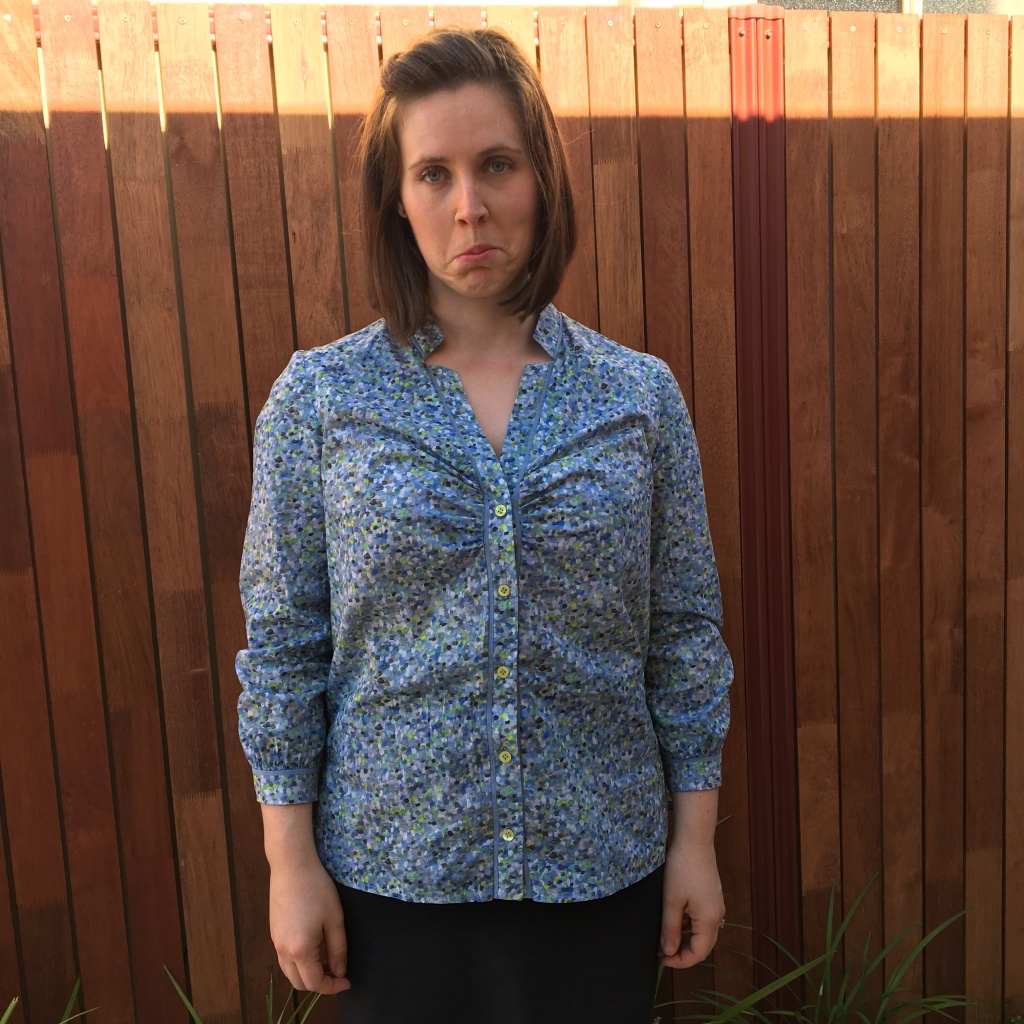 I will definitely be making this again when I find the striped cotton shirting fabric I have in my mind – because the stuff I used for my muslin shows just how well this pattern can show off a stripe. I love the way they curve around the bust and point up towards the collar. Perhaps some might find this unsettling?

Nothing to see here. JUST THE MOST AWESOMEST OF COMPLETELY UNINTENTIONAL PATTERN MATCHING, EVER.

Pressure to replicate that fluke is on!!!!

The sleeve itself is interesting as well – no ease in the sleeve cap (which I love), and what I would call a 7/8 length?

It has a cuff that buttons up and one of those split things (I have no idea what it’s called? An internal placket?!?), a pleat AND some gathering. I had to draft my own facing for the split-thing, but that’s fine (actually, I suspect I may have lost the tiny pattern piece for this in my messy sewing space – as the next shirt I sewed up after this one (the Wiltshire Shirt) has the same split and it came with a pattern piece) – I copied what I did pretty much exactly on my Blue Blotch Blouse (McCalls 5929, now OOP). It worked better than I thought it would. And completed, I actually love how the volume is concentrated on the out-facing part of the sleeve because of the gathers. 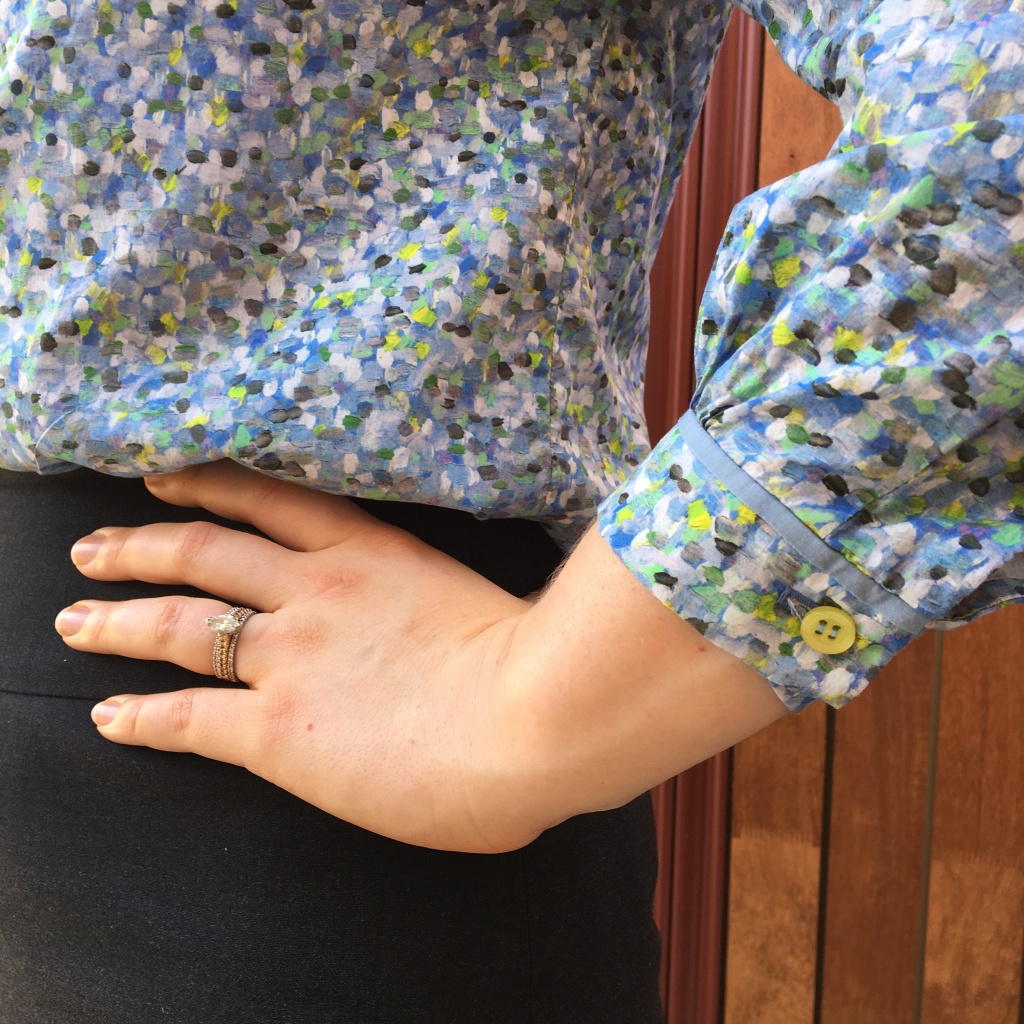 The sleeve cuff didn’t have a marking to indicate where to start the overlap for the button/button hole. I presumed there was supposed to be an overlap, so I wrapped the cuff around my wrist and gauged that 2cm ought to do it. I could have gone a bit less, I think. I then just used the gathered section to make the sleeve fit to the remainder of the cuff.

The hem is just a simple fold up and under and top-stitch affair. It also has side splits. As it’s extremely unlikely I’ll ever wear this untucked – I didn’t put a great deal of effort into any special finishing. Just a quick and easy fold under, press and stitch. 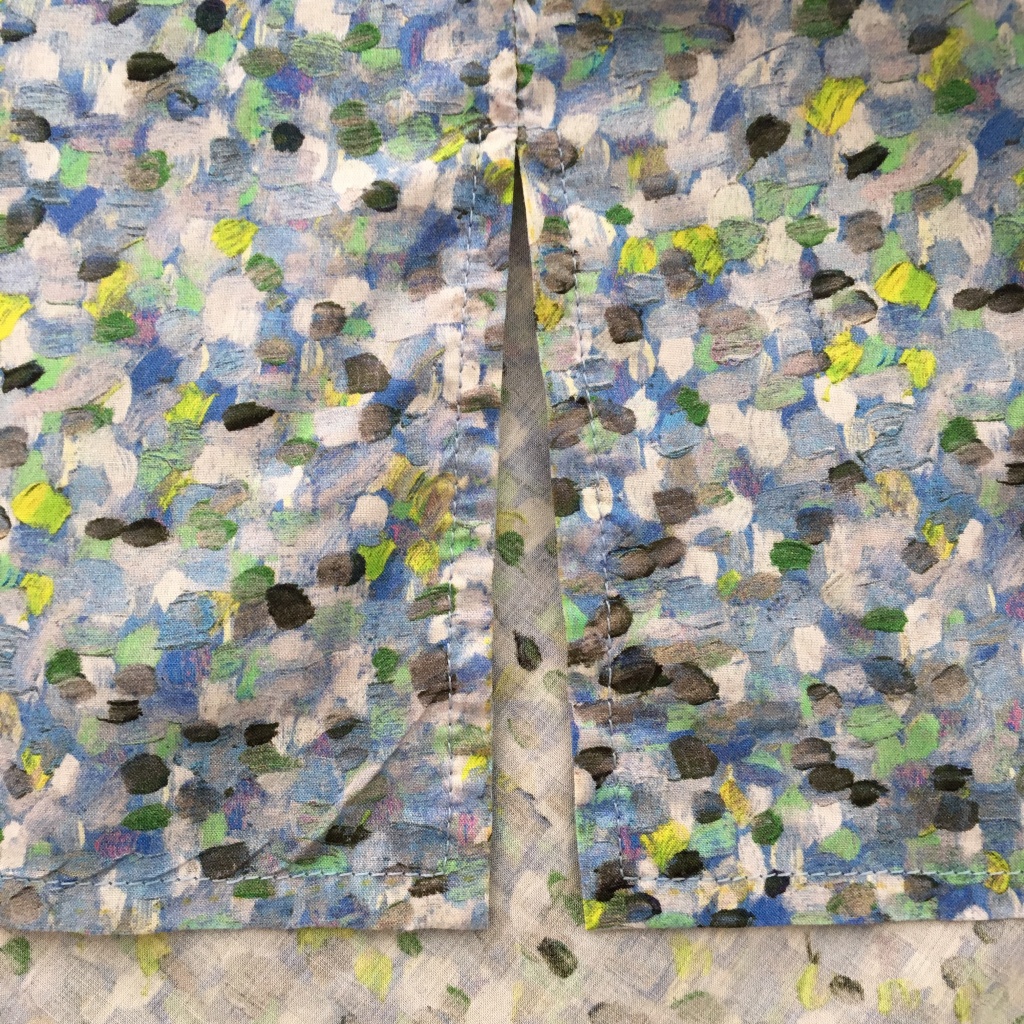 Where as the inside front is just overlocked, except for the collar/contrast facing, which I handsewed down. Not sure why I didn’t just include this in the overlocked part, to be honest!

FABRIC
It’s pretty hard to go past Liberty. This one is a painterly print called ‘Pointillism’, in its blue/grey iteration (which is apparently an ‘abstract interpretation of the wild floral fields of Tesco’ – Liberty of London’s words, not mine). It’s from Shaukat.

The cuff and the collar are interfaced with a double layer of silk organza (all eeked out of scraps, yay!) for a bit of structure. Any interfacing in the front placket needed to be soft and pliable so as not to awkwardly affect the way the shirt blossoms out when worn tucked in.

I also wanted a teeny bit of contrast on the collar in this one, and found a matching pale-ish blue cotton (blend?!) from The Fabric Store. It’s of a lousy quality – the grainline shifting all over the place and other bizarre behaviour – but with only a tiny slither required it was quite workable. (I was thinking a bit about this as I worked on this blouse… and I don’t half wonder if the closing up of a lot of clothing businesses in Aus has driven the changes I’ve seen at Melbourne’s The Fabric Store recently – a really great spread of Liberty of London fabrics compared to years previous? Hey, not that I’m complaining – but they did used to have a fabulous array of different fabrics that were of decent quality, and that seems to have dried up recently. Has anyone else noticed this, or know anything about the change?)

Buttons are from Buttonmania. It was the first time I did the whole ‘send a scrap of fabric away for them to match buttons to’ thing, and I was a bit thrown off guard with the lime green buttons they texted back to me. Even after I said in the accompanying letter that I would be cool with some left-field options! haha, I was forced to chew on those words in the end. I agreed to the lime green option, and in the end was glad I did – they look SO much better against the fabric IRL than they did in those photos they sent through. A really perfect match to the lime and fluoro yellow highlights in the Liberty.

And that is all for Marfy 3889. One more shirt to blog about (Marfy 5156) and I’ll be up to speed on things I’ve finished during 2017. I’m also almost finished a dress (I’m waiting on Buttonmania to come back from their Christmas break so I can get buttons!) plus have another 2 muslins finished and ready go into final production… but those will have to wait as I’m currently prepping for a class with Susan in a week or so, which I’m very VERY excited about!